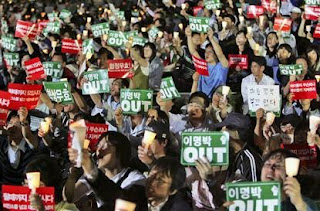 South Korean inspectors have rejected about 129 tons of U.S. beef since the controversial imports were resumed in November, officials said.

"Importers will be required to return, bury, or incinerate the disqualified beef imports," an inspections official told the news service.

A move by the government to resume U.S. beef imports into South Korea last year sparked massive street protests and demonstrations across the country, prompting Seoul and Washington to revisit their trade agreement to limit imports to meat from cattle under 30 months old, which are thought to be less prone to mad cow disease, Yonhap said.
Posted by Mz.Many Names at 12:53 PM