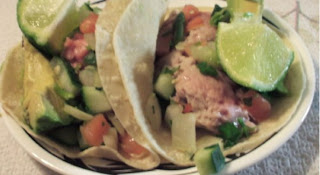 by Leonard Pierce April 11, 2009
Every week or so, our colleagues at The A.V. Club hold a Taste Test, in which they sample various cuisines with a focus on the new, the novel, and the downright bizarre. But why should Chicago have all the fun? Texas, after all, has no shortage of its own fascinating food and drink, just as enticing and/or disgusting as anything you’ll find on the shores of Lake Michigan. Every so often Decider presents the Texas Taste Test, wherein we shovel various Lone Star finds down our gullets. If you have suggestions for stuff you'd like to see us eat or drink for your amusement, e-mail us.

Reader Michael Doherty thought he’d get cute with his suggestion: Reminding us that our fair state was once a part of Mexico, and calling us out on the cowardice of our last Taste Test—which, admittedly, was not in any way disgusting or unpalatable—he challenged us to dip into some of the ickier corners of la cocina Mexicana by suggesting that we try something made with sesos. Or, as we say in Amurrican, “What the fuck? Brains?!”

Well, I’ve got news for you, reader Michael Doherty: This ain’t my first trip to the cattle-brains rodeo. As a child, my Southern family was always trying to convince me to try pig brains and scrambled eggs, but that was one Alabama delicacy (along with okra) I was always able to resist. Although, back when I lived in Chicago and had a profitable, mind- and waistband-expanding gig as a restaurant reviewer, I had occasion to feast at a place called Sabri Nehari, a “country-style” Pakistani restaurant whose house specialty was (and apparently still is) a beef brain masala that was good to the last thought. So while I can’t say I was exactly looking forward to eating them again, at least I wouldn’t be going into it blind.

The same, unfortunately, could not be said for my dining companion. While I assured her that brains were a perfectly, er, reasonable thing to eat, and were often enjoyed by non-zombie connoisseurs all over the world, the idea of sesos did not immediately appeal to her. I explained that brains could be prepared any number of ways in Latin cooking: deep-fried, layered on quesadillas or in empanadas, or served “Southern style,” i.e. in a mixture of scrambled eggs and fresh vegetables. (Surprisingly, it did not fill her with confidence to learn that this latter preparation is also known as “sesos revoltillos.”) It was only when I reminded her that she could be replaced—and that I had plenty of other friends dying to be the next Internet Eating Sensation Dave Chang—that she piped down and agreed to eat whatever brain-based dish was put in front of her.

Tracking down tacos sesos, even in San Antonio (where tacos are the sole pride of our regional cuisine), proved more difficult than anticipated. Panic over mad cow disease has caused brain-centric meals to fall into general disfavor, and while bovine minds were readily available at a number of Mexican meat markets, finding them in prepared form was a bit of a trial. Our original destination was Rosario’s, which was said to serve a mean brain taco, but apparently it’s not on the menu all the time. Likewise, Taco Taco Café, the destination taco joint in my part of the world, wasn’t serving it when we came around. Finally, the ever-reliable Rolando’s Super Tacos came through for us, happily tossing a cow’s cerebellum into a skillet for our dining pleasure.

So how was it? Well, the worst part is definitely seeing it before it’s cooked. Sesos looks unsettlingly like human brains when they’re raw, and no matter how much it’s transformed by the cooking process, it’s sort of hard to shake that image. Once it’s hit the frying pan, though, the taste is mostly forgettable: Not gross by any means, and even a bit on the bland side. Its mushy texture is similar to pork sausage (it actually looks a bit like ground pork), and it’s almost completely flavorless. Thanks to our back-door pals at Rolando’s, it was spiced up and served with a delicious cucumber salsa, avocado, and lime, which was enough to make us forget that we were munching on something that once thought, “Wait until I get out of this pen. Then I’ll really show the world what I’m made of!”

- “I feel like if I admit that they don’t taste that bad, I’ll be betraying the existence of this poor cow.”

- “I bet we would like it more if we didn’t watch them make it.”

- “If I get mad cow disease from this, is your magazine going to cover my medical bills?” (Apparently this question comes up a lot in Taste Tests.)

Where to get it: In Austin, tacos sesos turn up from time to time on the menu at Taqueria Arandas. Take a cue from the cow and don't think—just order.