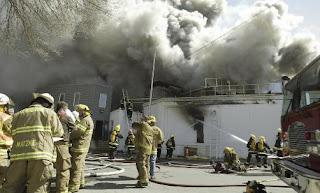 Winona County Sheriff Dave Brand said there would be no public access to the city of about 3,600 because of the fire at North Star Foods. Both major highways through the city were closed. Reporters were kept about 2 miles away. Smoke from the fire could be seen 10 miles away by late morning, and by late afternoon three torando-like clouds of gray smoke were visible from five miles away.

Civil defense sirens blared to warn residents to get out and officials went door-to-door ordering residents to head toward Lewiston, about 10 miles to the east. Sheriff's deputies and four buses began door-to-door evacuations of people and pets at about 3:30 p.m.

Evacuation centers were established at the Lewiston high school and other sites.

A hazardous materials team from Rochester was summoned as smoke poured from the sprawling building. Firefighters from surrounding cities converged to help fight the blaze. Police Chief William Eckles said a few firefighters suffered some smoke inhalation, but there were no immediate reports of serious injuries.

Anhydrous ammonia is used as a refrigerant in the plant and can cause severe burns, particularly to the eyes, throat and lungs. Information from the Minnesota Department of Agriculture indicates people exposed to the chemical need immediate medical care. Koverman said there were about 30,000 pounds of it inside the plant.

North Star Foods plant manager Mark Eads said the fire started late Friday morning above one of the ovens in where chickens are cooked. "Within two to three minutes, there was smoke coming out of the room pretty heavy," Eads said.

Carolyn Nicklay, who works in human resources for North Star Foods, said she called 911 and firefighters quickly arrived. "Everybody's out. Everybody's OK. That's all that matters," she said.

North Star Foods is the second-largest employer in the city with about 150 workers.

Business people in town were already concerned about what happens next. Alissa Spitzer, manager of the Good Sport Bar and Grill downtown, served drinks and noted, "A lot of people work there."

Amber Kesler, one of Spitzer's customers, agreed. "They might all lose their jobs," Kesler said. "And the way the economy is going, you don't want to lose your job."