By JUN STINSON Associated Press Writer
Prized for its tender, marbled texture and succulent flavor, Kobe beef is a delicacy that can cost 19,000 yen ($200) for a slab of steak at some Japanese restaurants.

But cattle farmers near the central city of Kobe are worried an outbreak of foot-and-mouth disease in the southern prefecture of Miyazaki, another key beef-raising region that often supplies calves to Kobe breeders, could spread to them as well — and impact Japan's premium beef market for years to come.

"I have to think seriously about the risk," said Shigefumi Tanimoto, a rancher for more than 20 years on Awaji Island, just south of Kobe. "If the foot-and-mouth disease came to Kobe, I could lose everything."

The disease broke out about two months ago in Miyazaki, on the southern island of Kyushu. To keep it from spreading, more than 270,000 animals were destroyed, including several valuable stud bulls, bred to sire calves with optimal fattiness. Under a state of emergency declared by the governor, people who lived in particular areas were urged not to travel, and vehicles leaving the prefecture had to have their wheels disinfected.

So far, the outbreak appears to have been contained, and no cows in the Kobe region have been found infected. Last week, the government said it completed preventative measures, allowing area residents to travel freely.

But the disease is highly contagious and the virus can be spread by water droplets, shoes, vehicles and other means.

"Foot-and-mouth disease is notorious for its ability to spread widely by many means especially animal movements," said Peter Roeder, an animal health expert and adviser for the U.N. Food and Agriculture Organization. But given the strong steps authorities have taken, he sees only a low chance of the likelihood of the disease spreading.

The virus causes lesions inside the mouth and on hooves, sometimes resulting in lameness. Calves are much more at risk of dying than older cattle. Humans cannot get infected from eating contaminated meat, but there have been rare cases of transmission from direct contact with sick animals.

All Japanese beef exports have been suspended since April 20. Japan exported 565 tons of beef, worth $40 million (3.8 billion yen) in fiscal 2009 through March, according to the Ministry of Agriculture, Forestry and Fisheries. The ministry doesn't break down exports of premium "Wagyu" beef, which includes Kobe and Miyazaki brands.

The culling of cattle will reduce the supply of meat available and drive up prices, farmers and experts say.

And even if the disease is contained, the killing of so many cows is a heavy blow to the market for "Wagyu" beef market since it means many farmers in Kyushu will have to restart the selective breeding process that has been key to producing the high-quality meat.

"Usually it takes two to three years to raise and fatten cattle before slaughtering," said Yasuhiro Nakashima, a professor of food and agricultural economics at Tokyo University. The breeding process to replace lost stud bulls could take much longer, experts say.

About 1,300 Miyazaki cattle are sold to the Kobe region every year, according to the agriculture ministry. But this year, sales were postponed or canceled because of the outbreak.

Restaurant owners who specialize in Kobe beef say their products are untainted, but they worry consumers still will avoid the meat. Past scares about mad cow disease and bird flu have hit their businesses, says Kazuho Miyasu, 48, owner of the Kobe steak house Miyasu.

"It usually takes four to five years to get our customers back after so much damage," said Miyasu.

The origin of the virus that causes the disease is still unknown, but prefectural officials say it is similar to a strain found in South Korea.

The owner of Kobe's Teppankyaki Onishi, Masakazu Onishi, said he agrees slaughtering cattle suspected of having the disease is the only way to eradicate it, but he sympathized with farmers.

"Some farmers care for their calves like their own family members," said Onishi. "I would be devastated if I were them."

Back on Awaji Island, Tanimoto says the disease — if it does spread — could destroy years of hard work.

"In the past 20 years I have raised four generations of cattle," said Tanimoto. "Foot-and-mouth disease would wipe out my business." 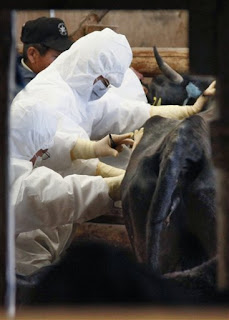 In this June 17, 2010 photo, veterinarians examine a cow at a farm in Ebino amid an outbreak of foot-and-mouth disease in the southern prefecture of Miyazaki. Cattle farmers in central Japan near the city of Kobe have been worried that the outbreak in Miyazaki, another key beef-raising region that often supplies calves to Kobe breeders, could spread to them as well. (AP Photo/Kyodo News) 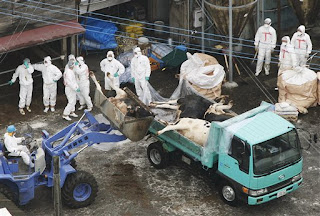 In this June 17, 2010 photo, workers look on culled cows being loaded on a truck for disposal at a farm in Kawaminami amid an outbreak of foot-and-mouth disease in the southern prefecture of Miyazaki. Cattle farmers in central Japan near the city of Kobe have been worried that the outbreak in Miyazaki, another key beef-raising region that often supplies calves to Kobe breeders, could spread to them as well. (AP Photo/Kyodo News)
Posted by Mz.Many Names at 11:58 AM