New Safety Rules for School Lunches Due by July 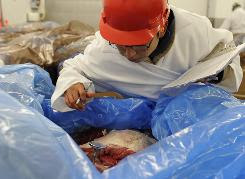 INDIAN WELLS, Calif. — By this summer, the U.S. Department of Agriculture will have launched its most sweeping safety reforms in a decade for the food it buys for school lunches.
But much work remains to ensure that food purchased for the National School Lunch Program — in particular, ground beef — is "as safe, wholesome and high quality" as the best commercial products, USDA official Craig Morris told program suppliers at a National Meat Association conference here last week.

The first step: enacting tougher safety standards for federally purchased beef. Those rules should be in effect by July, Morris said. New safety rules are likely tofollow for other commodities bought for the lunch program, such as poultry, eggs and produce. The program feeds 31 million students each school day.

Beef industry representatives here said they could adapt to the new standards but pressed the USDA to move fast so they know what changes will be required.

The new standards follow a USA TODAY investigation that revealed that beef bought by the USDA for school lunches is not tested as rigorously for bacteria and pathogens as beef bought by many fast-food chains. The newspaper also reported that some food producers have been allowed to continue supplying the school lunch program despite having poor safety records with their commercial products.

The USDA reforms, announced Feb. 4, focus largely on how beef and other foods bought for schools are tested for salmonella, E. coli O157:H7 and other contaminants. The department will commission research, including a study by the National Academy of Sciences, to ensure that its testing standards meet those of the most selective commercial buyers, Morris said. He serves as a deputy administrator of the Agricultural Marketing Service, the USDA branch that buys meat and poultry for the school program.

Not all details of the new testing rules are set, but Morris said beef for school lunches now will be sampled off production lines every 15 minutes — at least four times more often than current rules require. The government already rejects meat that tests positive for salmonella or E. coli O157:H7, but the USDA also will reduce the amount of other bacteria that are allowed, he said.

"We know (the new bacteria limits) will be something a lot lower," said Barry Carpenter, head of the meat association. He said he hopes the USDA will "look at what the industry is able to do now for the most discriminating, large-scale commercial buyers, and then set new standards consistent with that. If they do, I'm comfortable the industry will adjust and not miss a beat."

More testing could bring costs that prompt suppliers to raise prices, he said, "But it doesn't appear from anything I've seen yet that it will be significant."

The USDA reforms also will bar companies from supplying to the school lunch program if they have a poor safety record for commercial products.

The change could prove relevant to companies such as Fresno-based Beef Packers, which is owned by Cargill. The company has a history of salmonella problems, and ground beef it produced commercially last year was recalled after it sickened consumers. USA TODAY found, however, that 450,000 pounds of ground beef made at the plant during the recall period still was bought by the USDA and sent to schools.

Under the new rules, company recalls of products sold commercially could lead to a suspension from the lunch program.

Cargill spokesman Mark Klein said the company supports "efforts to improve safety, including the review of school lunch purchasing requirements." Beef Packers has taken steps to control contamination, such as spraying cattle carcasses to remove bacteria before processing, Klein said. And Beef Packers also will be part of a Cargill "pilot project to use third-party video audits of food-safety practices," he said.

The new beef standards are the first step in reassessing safety and quality standards for "the entire range of commodities purchased" by USDA for school lunches, Morris said. Those commodities — fruits and vegetables, fish and poultry, eggs and meat — amount to 15% to 20% of all food served in schools nationwide. Schools buy the rest themselves.

The review could determine whether the USDA will continue sending schools chicken from "spent hens" — old egg-laying birds. Commercial buyers, such as KFC and Campbell Soup, won't buy the meat because it doesn't meet their standards, but USA TODAY found that USDA has bought millions of pounds of spent-hen meat for schools.

Ultimately, Morris said, the USDA wants to have cutting-edge safety and quality standards for "the entire catalog" of food it buys for school lunches.

Weise reported in California, Eisler and Morrison in Washington
Posted by Mz.Many Names at 3:39 PM