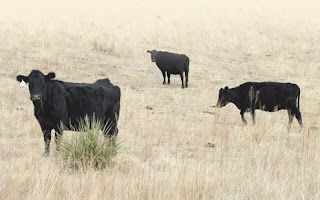 Cows graze in a field near Wellfleet. The United States Department of Agriculture recently announced changes to the national cattle-tracking system.

The United States Department of Agriculture recently announced changes that have cattle producers hopeful and may increase participation in a revamped cattle-tracking system.

Last week Agriculture Secretary Tom Vilsack told attendees of the National Association of State Departments of Agriculture that the USDA will develop a new, flexible framework for animal disease traceability in the U.S.

The announcement came after a cross-country, 15-city listening tour held by the USDA last year.

"After concluding our listening tour on the National Animal Identification System [NAIS] in 15 cities across the country, receiving thousands of comments from the public and input from states, tribal nations, industry groups and representatives for small and organic farmers, it is apparent that a new strategy for animal disease traceability is needed," Vilsack said in a press release. "I've decided to revise the prior policy and offer a new approach to animal disease traceability with changes that respond directly to the feedback we heard."

The basic facts of the new program are: It will only apply to animals moved in interstate commerce; it will be administered by states and tribal nations to provide more flexibility; it will encourage the use of lower-cost technology; and it will be implemented transparently through federal regulations and the full rulemaking process, according to guidelines released by the USDA in the same press release.

"One of my main goals for this new approach is to build a collaborative process for shaping and implementing our framework for animal disease traceability," Vilsack said, according to the release. "We are committed to working in partnership with states, tribal nations and industry in the coming months to address many of the details of this framework, and giving ample opportunity for farmers and ranchers and the public to provide us with continued input through this process."

That appears to be exactly the kind of thing cattle producers wanted from the start.

"It appears the USDA is trying to be better," said Randy Saner, Lincoln County farm extension agent for the University of Nebraska-Lincoln. "They're going to listen to producers and this should, hopefully, produce more buy-in from producers."

According to the USDA, less than 40 percent of current cattle producers use NAIS. The system of electronically tracking cattle is expensive and, with $120 million spent on NAIS and less than half of the industry participating, it's not money well spent.

"The call for NAIS in the first place came from trading-partner countries who wanted their product identified, pasture to plate," said Bill Rishel, a North Platte cattleman and current president of the Nebraska Cattlemen's Association. "While some exporting nations have implemented programs, their industry is not nearly as large as ours is."

Several issues were raised by cattlemen about NAIS, Rishel said.

"There were several things cattlemen didn't like about NAIS," he said. "There was a privacy issue. The industry felt a private entity should be in charge of the data, not the federal government.

"That independence for our producers is key."

Other issues were cost, confidentiality and liability.

"Many producers were afraid they might get blamed for a problem that happened after the cattle left their ranch," Rishel said. "Liability is a big issue for producers."

While cattlemen are happy NAIS is changing, they're hopeful the core issue remains in focus.

"No one in our industry wants to see a disease outbreak," Rishel said. "The main reason for having a system is obviously disease surveillance. "

For cattlemen, the best news coming from the announcement was the change of federal government control to more localized oversight.

"It's good to see USDA make an effort to listen to producers and states," Rishel said. "It sounds like they are trying to appease some concerns we have with NAIS."

"The fact they're going to use states will help get some people on board," Saner said. "No one wants to see any sort of disease outbreak but people want to know where an animal comes from."

While everything appears to be moving in the right direction, no one knows yet where the finish line is.

According to the USDA press release, the next step is a forum with animal health leaders for the states and tribal nations to begin a dialogue about possible ways to achieve a flexible, coordinated approach to disease traceability. The USDA also will be changing the secretary's Advisory Committee on Animal Health to address specific issues, such as confidentiality and liability.

"It's a good start," Saner said. "Instead of being told cattlemen need to participate in this, they're being asked to help come up with a better way to do this."