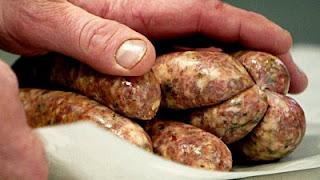 The Food Standards Agency is advising people not to eat any pork products that originate from Northern Ireland or the Republic of Ireland.


There are fears that pork products sold in the last two months could have been contaminated.

The Food Standards Agency said it was making the precautionary recommendation while it continued to investigate whether any contaminated pork products had entered the UK market.

A statement said: "The Food Standards Agency is today advising consumers not to eat pork or pork products, such as sausages, bacon, salami and ham, which are labelled as being from the Irish Republic or Northern Ireland, while it continues to investigate whether any products contaminated with dioxins have been distributed in the UK.

"From the information that we have at this time, we do not believe there is significant risk to UK consumers as adverse health effects from eating the affected products are only likely if people are exposed to relatively high levels of this contaminant for long periods."

The Food Safety Authority Ireland insisted the health risks to the public were minimal and the withdrawal was a precautionary measure.

Nine farms in Northern Ireland have used the same contaminated animal feed which has led to a recall of all pig products processed in the Republic, it has emerged.


This announcement amounts to a threat to the overall viability of our food industry, as great as, if not greater than, the outbreaks of BSE and of foot and mouth.

Animal feed tainted with dioxins was blamed for the crisis, which could cripple Ireland's multi-million euro pig farming industry.

The recall affects all products bought since September 1 including foods shipped abroad.

"Thankfully, the problem was identified and dealt with very rapidly. The food process involved has been shut down," he said.

He added: "Our intention is to deal with this very robustly and re-establish the reputation Ireland has as a quality food producer."

The dioxin, which can affect the liver and nervous system, is only dangerous if a person is exposed to it over a long period of time.

The contamination has been traced back to an ingredient in an animal feed which was used by one supplier in more than 40 farms.

Thousands of pigs are expected to be destroyed while restrictions have been placed on movements from the remaining sites affected.