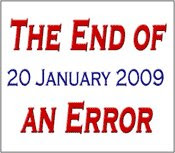 Of all the animals in the United States facing cruelty and exploitation, those raised and slaughtered for food make up the vast majority. One of the most significant impacts President Elect Barack Obama can make for farm animals as he transitions to be the leader of our country, lies in who he chooses as the next Secretary of Agriculture.

The next Secretary of Agriculture needs to support a new American diet, one filled with fresh fruits and vegetables and other plant foods grown by sustainable methods and available to all, rather than continue down the path of harmful industrial animal agriculture and government subsidies to the wealthy meat and dairy industries.

Please urge President Elect Obama to appoint a Secretary of Agriculture who will bring needed change to the U.S. Department of Agriculture and our broken food system. Tell the Obama Administration your vision of a government where farm animal welfare matters.

P.S. Read more about this topic on my blog. http://action.farmsanctuary.org/site/R?i=_ALkFiXS8Kgc4yxooYRddw..

Here also is a comment we sent to Prez-Elect Obama at his Change.Gov site; You can too!
---------
Dear Prez Elect Obama,

As you may already know, millions of Americans are concerned with
animal welfare. There are many important issues that are being or
need to be considered by our congress, such as factory farming
cruelty, equine cruelty slaughter, and illegal transportation issues,
dog fighting and pet over-population, and many more. I am
disappointed that you do not even have animal welfare on your
alphabetized "agenda" list and since animals start with an "a" animal
welfare should be FIRST on that list. Why is it important to us, the
animal lovers and protectors or the world? Ask Ghandi who said, "The
Greatness of a Nation and its Moral Progress Can be Judged by the Way
its Animals are Treated"
Please take this into consideration when updating your agenda list.
Thanks!

Christine A Jubic,
Friend of Animals

Write the Prez-Elect at Change.Gov and tell him to put "Animal
Welfare" AT THE TOP of his alphabetized "agenda" list where it
belongs!

Click on title above to go to Change.Gov where Obama is waiting to hear from YOU!

Now is the time for all good animal welfare folk to come to the aid
of the animals of this country! Make sure to make a GREAT BIG NOISE
for them with our new president coming into office next month.
Posted by Mz.Many Names at 9:23 PM